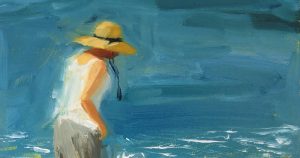 My friend Carol introduced me to sea glass.  She lived on the Chesapeake Bay with her deranged husband John.  Carol’s life resembled that of Laura who later became Sara in the movie “Sleeping with the Enemy”.  Each day brought a new level of fear and uncertainty as Carol wondered what might happen next.  Hunting sea glass was a way for us to spend quality time together as she sorted things out.  Like Laura, Carol eventually had to move away to save herself.  It took a lot of courage to leave John and to start her life over again in a new town, but she did.

I continued to walk Carol’s shoreline for many days after she left.  By now hunting sea glass was not only therapeutic for me, it had become my new obsession.

For those of you who aren’t familiar, here’s a little Sea Glass 101.

Sea glass is fragments of glass, sometimes referred to as shards, that have been on a voyage in oceans and rivers for a very long time before finally washing ashore.  Sea glass connects us to the past since a lot of it originates from old shipwrecks or structures that were washed into the sea by mighty storms or tornados. Sea glass captures our imagination as we contemplate where it came from and what it used to be.  Sea glass comes in all sizes, shapes and colors.  Occasionally, if you’re lucky, you’ll find ceramic and pottery pieces too.

Sea glass is a subjective form of art with a romantic nuance.  Mother Nature takes something ordinary and mundane and turns it into something beautiful.  Those who hunt sea glass are called “Seaglunkers”. The best time to hunt is when the tide is low, the moon is full and right after there has been a powerful storm.  The best places to hunt sea glass are inner harbors, former coastal dump and factory sites, river mouths, beaches near known shipwrecks and residential areas with severe storm damage.

As with any sport or hobby, sea glass hunters can become quite competitive as well as territorial.  My favorite t-shirt is one with a little mermaid on the front whose tail is made of sea glass.  Her little arms are flailing in the air exclaiming “what’s she doing on MY beach?”

Sometimes we forget that sea glass is really only another person’s garbage.  It has no true value except to the collector or until someone transforms it into jewelry or some other beautiful work of art. There is a down side to sea glass hunting too and that is, we never look up.  We’re always fearful of losing out on a piece of “treasure” in the sand if we do, so we frequently miss the view all around us.

Are you a Seaglunker? If so, feel free to post a pic of some of your favorite shards or other finds.