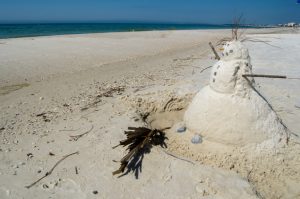 One of my favorite Zac Brown songs is “Knee Deep”, especially the lyric that says “the ocean is my only medication” because for me it is, except for music of course and the St. John’s Wort that I take for anxiety.

The day was cloudy with an occasional tease from the sun.  The temps were relatively cool, but the rain had finally stopped and that was a good thing.  It had been a heck of a week and I needed to immerse myself in some wandering and mindless thinking.

As the saying goes, any day at the beach is a good day, so I deleted my Facebook app from my phone so I wouldn’t be tempted to check it throughout the day, turned my FM dial to 102.5 The Shark to jam to some “killer hits” and I headed to our neighbor beach.

The Outer Banks of North Carolina by the shoreline is approximately 15 miles from Sandbridge, which is located at the far southeastern corner of Virginia Beach.  The trip by car takes me about an hour and a half, which is worth it because the drive is rural and peaceful, unlike the rat race of the interstates.

There were two things on my mind when I left home that day…a cheeseburger in paradise (well Sam & Omie’s is not exactly paradise but it would satisfy the craving) and a latte from Starbucks for the drive home.  Everything else would consist of meandering and life in between.

The last time I visited the OBX was early summer last year. As I traveled the beach road south from Kitty Hawk, I couldn’t help but notice how much that vulnerable strip of coastline has taken a beating from all of the recent storms.  Many of the occupants are in crunch mode now getting ready for the upcoming season.  I guess some of the biggest news in town is the opening of the new Publix as evidenced by the parking lot that was filled to overflowing.  I was also happy to see that the Kmart is still there because I happen to like some of their stuff and most of their stores have closed in our area.

A few years ago I had the pleasure of dining at The Colington Café, a charming Victorian style eatery nestled on a hillside in Colington.  I can still remember what a delightfully unexpected dining experience it was, my son describing it as somewhat of an anomaly back then. This little jewel of a cafe’ almost succumbed to an arson fire last year and I couldn’t wait to check it out to see if it was still there.  Thank goodness it is.

The Salt Box Café is another spot that had piqued my interest from an article I had read recently. Unfortunately it was getting late in the day, so I decided not to go inside.  I now have an excuse to visit Colington Harbour again soon.

One of my favorite things to photograph is small country churches and I took this pic of the memorial garden at the Colington United Methodist Church as I was leaving the area. 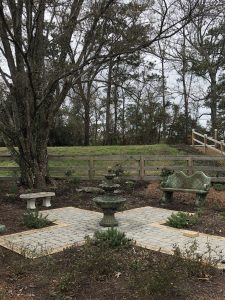 Another stop on my day of wandering was The Little Red Mailbox located at the public beach access near Milepost 8.  Being the message in a bottle, hopeless romantic that I am, I was a little disappointed to find it attached to the gazebo and full of random stuff including trash. I guess I should have done my homework as I was expecting to trek through sand and find it nestled at the foot of a dune filled with the poignant writings of deep, lost souls like myself. Of course the storms would have probably washed it away by now, so it’s better off in the safe place where it is located.  There’s a beautiful story behind the little red mailbox. Although I didn’t leave a note, my hope is that visitors will appreciate them and continue to use them for their intended purpose…to spread hope. 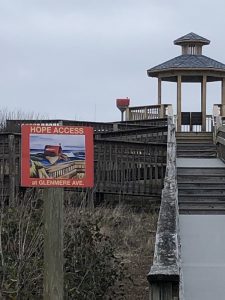 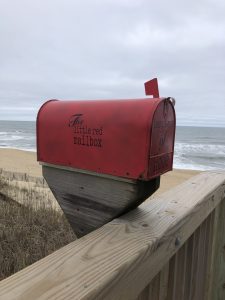 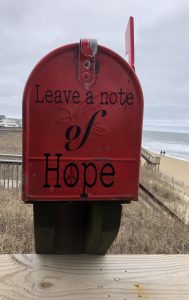 The last stop on my journey was that barn red labyrinth in Jarvisburg known as The Cotton Gin, located adjacent to the Sanctuary Vineyards where they were celebrating Mardi Gras with a Cajun festival that day.  The worker bee at the Cotton Gin encouraged me to check it out and to “like” the vineyard on Facebook.  Of course she didn’t know that I was running away from Facebook that day and that if I did decide to go, I could just “enjoy” the festival without having to “like it” on Facebook…haha.

And there we have it, another impromptu road trip in the books…not dependent on the weather, GREAT kind of day!

As always, the “simple” life is just a matter of perspective.