Sometimes I like to include relevant YouTube videos at the end of my blog posts but today I decided to place it at the top since this song was the inspiration for my blog.  Of course the first time it popped up on my playlist, I began to cry and had to turn it off.  There are many great versions of “Under the Boardwalk” but this particular one by Bette Midler from the soundtrack of the movie “Beaches” is my favorite.

Our family was anything but normal growing up.  Looking back on those times now however, I’m thinking that maybe we didn’t have it so bad after all…that we were more “normal” than we realized and certainly fun loving.

We began visiting the beaches of Hampton Roads when we were little kids…long before we became James River rats…Buckroe Beach in Hampton, Ocean View in Norfolk with it’s great amusement park and wooden roller coaster and the Virginia Beach oceanfront where my brother and I have called home for the past several years.   It doesn’t surprise me that both of us ended up back down here.  I believe there’s a little bit of ocean and salt air in all of our souls that beckons us to return to the sea.

My dad…God rest his soul was a very handsome, charismatic and successful car salesman, especially when his inner demons didn’t get the best of him and he was able to work.  Dad was known to turn “happy hours” into marathons and he was prone to coming home in the wee hours of the morning after a night of carousing and drinking and wake us up to see if we wanted to go to the beach…Virginia Beach that is.  There was always a resounding “yes” because we were kids and who wouldn’t want to do that, even if it was in the middle of the night…everyone that is except mom.  She was always outnumbered and a reluctant participant but she knew that if we didn’t, there would be hell to pay for the rest of the night because you can’t argue with a drunk.

Mom always drove…she didn’t even have a driver’s license back then, my brother, sister and I piled in the back seat and Dad would ride shotgun.  We were so excited…we were going to the beach! The rear floorboard was pretty cozy because two of us could nestle in the foot area and lay our little heads on the hump in the middle that covered the transmission; the third one could stretch out on the back seat.  I don’t remember us ever packing a bag with suntan lotion, swim suits and towels like normal people do and we certainly didn’t check into a hotel anywhere; we literally drove the two-three hours there just to watch the sunrise and to hang out a bit before turning around and heading back home.  We didn’t know any better at the time and in those moments, life was good.

The iconic Virginia Beach Fishing Pier will always have a special place in my heart.  This wooden relic still juts out from the resort area’s shoreline and hasn’t changed much over the past 70 plus years.  These binoculars on the pier are a humorous and bittersweet memory to me also. 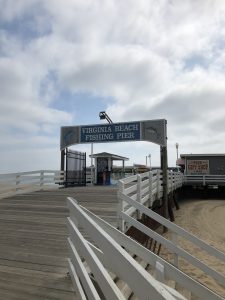 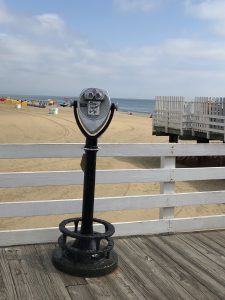 As mentioned earlier, dad would frequently turn after work happy hours into marathons and he certainly never changed into his board shorts or swimming trunks before heading to the beach.  I’ll never forget one early morning when he “took a nap” (code for passed out) in the sand near the pier still wearing his business suit.  A homeless guy sat down beside him and mom was afraid that he was going to “roll him” (street slang back then for rob him).  Poor mom with her three little kids up on the pier probably getting something to eat noticed what was going on and she used those binoculars to keep watch on my dad to make sure that nothing went down (happened).  This all sounds so crazy but this was our life back then and it warms my heart to think of it now.

Another fond memory is how we used to love holding onto the pier pilings and letting the sand wash out from under and around our little feet. We were also afraid to step on the pier cracks for fear that we might fall through.

I have mixed emotions about nostalgia, melancholy feelings and living in the past too much.  Our memories are the fabric of our lives however and if they’re good ones, I believe we should replay them over and over again.

So what draws you to the ocean? Please feel free to share.

4 thoughts on “Under the Boardwalk”