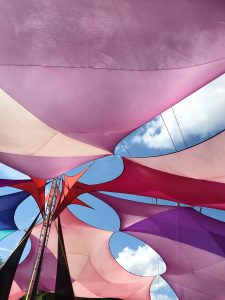 Happiness is spending time with the ones you love and over the 4th of July holiday my sister and I did just that at the “Jam Sandwich Festival” on Mayo Island in Richmond, VA.  We had a blast!  Now we didn’t attend the festival because we like jam sandwiches…in fact we didn’t see a single one there!  We went to the festival because my sister is a huge fan of Michael Franti & Spearhead and they were there. There are plenty of things to love about this 6’6” tall self proclaimed soulrocker…from his tattoos to his long dreads to the fact that he never wears shoes…but the biggest thing to love about Michael Franti is the fact that he is a humanitarian who plays powerful, fun and uplifting music with a lot of jumping involved. 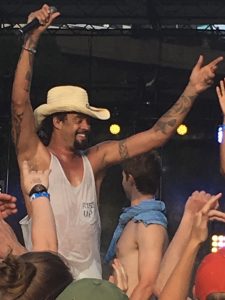 My sister’s formal name is “Nellie”…a name she has never been fond of especially as a little girl.  She is named after our grandmother.  Nell (her nickname) recently discovered a new word that she is happy to embrace and that suits her to a tee. The noun is “nelipot” which means “one who walks without shoes; one who goes barefoot”.  Naturally she and Michael Franti have this one thing in common and she couldn’t wait to tell him so.  The cool thing about a small festival like the Jam Sandwich is that you are sometimes able to interact with the entertainment on a personal, more intimate level.  Earlier in the day Michael’s Facebook page invited everyone to join him for a yoga session at 1:00 p.m. but unfortunately due to travel delays the yoga session was cancelled.  He made up for it later however by hosting a “meet and greet” where he took lots of selfies with his fans while engaging them in conversation including my sister who shared about the “nelipot”.  It took Michael a few moments to understand what she was talking about…I can’t imagine why!  At first he thought she was talking about the Neti Pot which is used to cleanse your sinuses.  She was finally able to get her point across about their barefoot commonality and he seemed both amused and intrigued by it all. 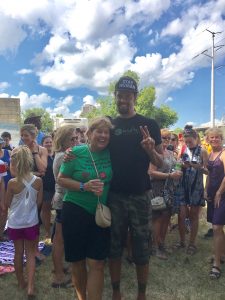 As we get older and continue to do some of the things that we used to do like go to concerts, we find the “simple” aspects of the experience more appealing…like people watching.  It becomes more about “seeing” and not so much about “being seen”.  Happiness for us that day was sitting in our $5 camp chairs under a gently blowing canopy, listening to great music, eating fried pickles and drinking strawberry jam lemonade.  This festival themed concoction was crafted using Country Time Lemonade, Smucker’s strawberry jam (in lieu of simple syrup) and Tito’s handmade vodka…so refreshing on a hot summer day that the bartenders could barely keep up with the demand!

Nell and I have always been close…in fact she is like a best friend to me.  Growing up sharing a room we were like The Odd Couple’s Felix and Oscar …she was the neat and tidy one…I was the messy one.  We used to spend lots of time together playing make believe games like “circus”.  When you grow up in a poor household, you use your imagination and it makes for lots of great childhood memories.   The circus game resembled a ride at the fair in that I would lie on my back with my feet in the air to form a seat, Nell would sit on my feet and I would circle her around a bit.  When she least expected it I would bend my knees, drop her down and we would both giggle our heads off and do it all over again!  We used to cut out paper dolls and rooms full of furniture using old Montgomery Ward & Sears, Roebuck catalogs and then spend hours playing with them on the floor. Once I tried to pierce her ears with a link from a broken charm bracelet and a pair of pliers…it’s a wonder they didn’t get infected!  She trusted me.  I was her protector and she was my little sister. 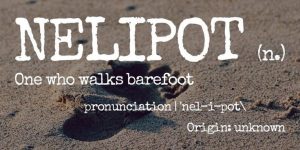 The inaugural Jam Sandwich Festival was finally over and we headed home.  No day of fun would be complete however without a stop at McDonald’s for Happy Meals!

This blog is dedicated to my “nelipot” because after all…life is better with you!