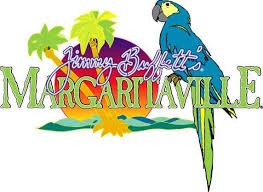 Actually I’m referring to my “bucket” list and yes, seeing Jimmy Buffett in concert was one of the things on my list.  When I first wrote it down, I imagined seeing him perform in a tropical place somewhere with the sun shining down, palm trees blowing in the breeze and tiki bars dispensing frozen margaritas!  Brrrrrrr…now for the reality check!  The only thing frozen at the concert Saturday night was a very devoted crowd of Parrotheads who refused to let the chilly winds and 40 degree temps dampen their island spirits.  As far as the eye could see, there were people dressed in Parrothead garb.  There were pirate and shark costumes, hats decorated with pink flamingos, margarita glasses, parrots, cheeseburgers and all kinds of other crazy.  I even pulled an old Hawaiian shirt out of the attic and wore a puka shell necklace for the occasion just so I would fit in!  Buffet has a pretty broad fan base and there were lots of families there too having a blast with their young adult children.  Probably the one thing that I admire the most about Jimmy Buffett is the fact that he has built an enormous empire around promoting and merchandising “escapism”.  His feel good music and concerts have the ability to transport tens of thousands of people to a happier place.  Tonight my happy place was sitting in a lawn chair wrapped up in a cozy blanket surrounded by great friends who didn’t seem to mind the cold at all.

Tailgating is a big part of the Jimmy Buffett concert experience and for a while his tour did not include our city because tailgating was prohibited at this particular venue.  Eventually the ban was lifted and now his fans are free to party Buffet style before the show. Jimmy’s personality is very warm, easy going and engaging and he likes to arrive a day or two before his concert so that he can pop in, surprise and spend time with the locals.  One of the places that he visited while he was here is a small restaurant in the southern end of the city called Flip Flops  and he gave a shout out to them during the concert for their great fish tacos.  He also spoke nostalgically of past visits to the Duck In; a locals haunt which was located on the Chesapeake Bay off of Shore Drive.

Jimmy Buffett is a sailor, an author, an actor, a singer, a philosopher, a philanthropist, an entrepreneur and a smart businessman.  In addition to concerts and best selling books, themed restaurants and retail sales, I have discovered that “tropical place” that I spoke of earlier in this blog… the Margaritaville Beach Resort located in Hollywood Beach, Florida!  I think I’ve found one more thing to add to my “Buffett” …oops!.. bucket list.  At the beginning of the concert, Buffett said that people always ask him when he is going to retire.  He chuckles and responds “retire from what?”  Buffett will turn 70 years old on Christmas Day.

Are you a Parrothead or a huge fan?  If so, please feel free to share your concert memories and experiences.

Below is a homemade video featuring his humble beginnings and one of my favorite Jimmy Buffet songs.  I love the way the hood flys up on his pickup truck when he hits a bump!

3 thoughts on “One Less Thing on My “Buffett” List…”