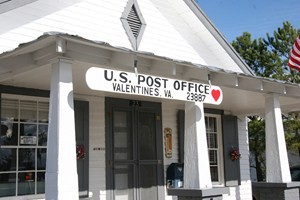 Yes, there is such a place as Valentines, Virginia and it is located near the North Carolina border in Brunswick County.

I first learned of Valentines when my daughter was small.  She received a Valentine’s Day card from her grandmother who had driven to a place called Valentines for the sole purpose of having her U.S. postal stamp cancelled with the Valentines Post Office postmark.  The things we do for love, right?

The community of Valentines isn’t marked by a road sign but you will find it at the intersection of Western Mill Road and Manning.  Inside of a little country store known as Wright’s General Merchandise, the post office is housed.  Business has been booming over the past couple of weeks; the business of love that is!  This little spot in the road has become known nationwide for sharing a name and playing a role in the most romantic day of the year.  Sometime around the end of January, cards and letters start arriving by the thousands from all over the world.  Hundreds of them are hand delivered by locals as well as from others as far away as Maryland and Washington, D.C.  They all want to participate in the Valentine’s Day tradition of getting their envelopes hand-cancelled with a black, heart shaped postmark.

This “labor of love” was started by the postmaster Mr. William R. Wright around 1950 when he decided to embrace the quirkiness of his town’s name by rubber-stamping the mail around February 14th.  The early emblem featured a heart and dogwood blossom designed by Mr. Wright himself.  Word quickly spread and since then tens of thousands of cards, letters and packages flood in annually.

Today the little post office is run by a lady named Kathy who made a promise to Mr. Wright on his dying bed that she would keep the Valentines tradition alive.  She’s doing a great job of it too but just like Santa Clause on Christmas day, Kathy celebrates the “day of romance” by breathing a sign of relief that the rush is over and she can finally catch her breath again.

In case you’re wondering, Valentine’s Day postmarks aren’t the only thing this little community is known for.  This “lovely” little gem on the side of the road has also been the site of several Valentine’s Day weddings.