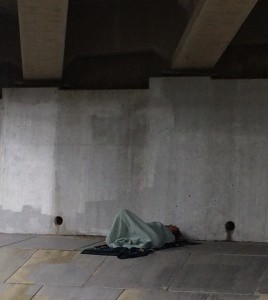 We have a very large homeless population in our city.  We pass by them everyday sitting at street corners, sleeping on benches and under bridges and walking the streets, especially along the edge of the woods where many of them live. There are also many great resources available for those that want help.  Many homeless people are addicted to drugs or alcohol; others have medical conditions; many suffer from mental disorders.  Some have lost their jobs, homes and families and have no where else to go.

Her name was Debi and she appeared out of nowhere early one morning.  Maybe it was the warm glow emanating from my coffee shop that drew her near.  Homeless people typically vacant their overnight spots at daybreak to avoid getting a citation, especially during the tourist season in a resort area.  I normally arrived at the shop around 6:00 a.m. just as the sun was coming up over the ocean.  As I was going about my morning routine of baking muffins and brewing coffee, she caught my eye.  Debi was a pretty girl in spite of her hardened look.  She actually appeared a little too “put together” to be homeless and living on the streets.  I opened the door and offered her a free cup of coffee.  At first she was timid and shy but eventually she accepted.  She offered to pay with the few coins that she had in her pocket but I couldn’t take her money.  She seemed skittish as she turned around and left.  I encouraged her to come back again sometime.  As she walked across the parking lot, I noticed that she was heading towards a bike that she had left parked along the hedges.  Her knapsack containing her personal belongings was hanging on the handlebars.  I later recalled how she had kept a watchful eye on it the whole time she was in the shop in case anyone tried to steal it.  Debi soon became a regular.  Most mornings she was waiting outside the door before I opened.  The café was located in a strip shopping center and I used to catch her combing her hair in the reflection of the plate glass window next door.  She was very particular about her appearance especially her curly brown hair.  Some mornings she looked disheveled; some mornings she would chat a bit; others she didn’t have much to say.  Her favorite coffee flavor was southern pecan.  Occasionally I would offer her a fresh baked muffin which she would always carry with her.  I suspect that Debi suffered from a mental illness; maybe schizophrenia.  She appeared normal at times and at other times she was agitated.  Some days she would walk alongside the busy street ranting and raving and shouting expletives to passersby. She had an income source that she retrieved from a post office box; probably from family that she had mentioned occasionally.  Debi always looked clean and wore seasonal clothing.  One day she showed up with a new knapsack and I questioned her about it.  I wondered at times if I was being taken advantage of because I wasn’t sure just how needy she really was.  She seemed embarrassed and ashamed when I confronted her and said that she got the knapsack from the shelter.  Debi wanted to work but it is very difficult for homeless people to find jobs on their own.  They usually lack the proper ID i.e. birth certificate, driver’s license, social security card as well as transportation and a permanent address.  Many businesses aren’t willing to hire the homeless, especially if they look like they are.  Debi was pretty slick however.  She wanted to work at a mountain sky resort and somehow managed to secure a job application and figure out where they were holding interviews.  I helped her with her paperwork and on the morning of the interview, she showed up in khaki pants and a crisp white shirt that she said she had “borrowed” from The Hilton hotel down the street.  She was definitely dressed for success!  The job opportunity didn’t work out for her that day however.  I recall another funny story about Debi.  One day there was a motorcycle parked in front of the shop with a couple of helmets hanging on it.  Debi happened to come along during that time and she was really mesmerized by the bike.  She just stood there staring at it and eventually came inside and asked the customer if he would give her a ride on it.  Of course he refused.  The very next day Debi showed up riding her bicycle and wearing a motorcycle helmet that she said she had “found” somewhere.  She continued to ride her bike that way for several days.  Things were about to get awkward between Debi and me however.  One day after she left the shop I found a note on the counter that she had written.  The note said that I was her favorite cup o’ Joe and said how much she looked forward to coming to the shop every morning.  She wanted to know if we could hang out sometime.  The note really freaked me out.  The next time she came in, I confronted her and told her that she had mistaken my kindness towards her for something different and that she had really made me feel uncomfortable.  Truthfully I really didn’t want her to come to the shop anymore after that.  My heart of compassion had turned into one of fear and anxiety because of her mental instability.  I used to spend a lot of time alone at the shop after dark and sometimes I would imagine that she was outside watching me and I couldn’t see her.  Several times I asked the police to sit out in the parking lot while I finished up and walked to my car.  They were always more than willing to accommodate.  Even though Debi had never threatened me, my imagination had started to run wild.  According to the neighbors, she stopped coming to the shop after I sold it and I haven’t seen or heard from her since.  I still wonder if she is ok.  Debi didn’t do anything wrong.  She probably just wanted to be “normal”.

Since Thanksgiving is next week, I decided to visit a homeless shelter to find out if any of them feel that they have anything to be grateful for.  With the assistance of the Volunteer Coordinator, I was able to speak with two ladies, Sharon and Becky.  Their backgrounds were similar in that they both had worked in the fast food industry for many years, both had been sexually abused, both had served time in prison, both had battled addictions and both had been sleeping on the ground until they came to the center.  I asked them four questions.  The first one was “What happened to you and how did you end up homeless”?  Their answers were due to the circumstances described above.  The next question was “What do you miss the most about your former life”?  Both said jobs and family.  The third question was “What are your hopes and dreams for the future”?  Both said they want permanent jobs and places to live.  Becky wants to be reunited with her cat “Sassy”.  Sharon wants to be reunited with her boyfriend who is in a similar situation but in another state.  The final question that I asked them was “What are you grateful for today”?  Their answers surprised me. They said “a new day, the shelter and the staff that are helping them to get their life back together, sobriety from drugs and alcohol, family and faith”.  I thanked them for their willingness to speak with me and left them with a goody bag.  Becky made me promise that I would come back and join them for dinner sometime.  Wow, the gift of hospitality even at the homeless shelter!

Special thanks to the Volunteer Coordinator and staff of The Judeo- Christian Outreach Center for facilitating this interview.

Happy Thanksgiving to grateful hearts everywhere; especially to those who are a lot less fortunate than we are.