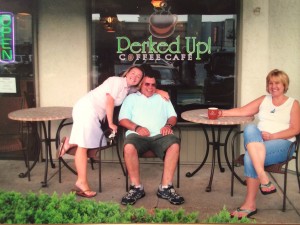 On July 30th I celebrate the “birth” of this special little coffee shop that I affectionately nicknamed “Perky”.  She was a dream of mine that became a reality that day and she is still going strong.  She was 433 square feet of sweat equity…but in return she gave a lot of love.

One night while taking a walk, I decided to pick up a real estate guide with the notion of buying a home.  What I found instead was a tiny coffee shop for sale.  I remember gazing through the plate glass window imagining myself owning it and thinking about all of the great things that I would do if it were mine.  My patience and willingness to wait finally paid off and after several months of negotiations, I received an e-mail from one of the owners saying they were willing to accept my offer.  That was on Mother’s Day that year and what a gift it was!  I had always dreamed of owning a little boutique type small business…a special place where people would enjoy coming to and spending time. I told myself before I even opened my doors that regardless of how things turned out, I was a success.  I was a success because I had the courage to step out on my own and give it a try.

My son had prior coffee shop experience and he was willing to work alongside me and train me for a couple of weeks before heading off to law school.  That is the only “formal” barista training that I ever received.  It wasn’t long before business was booming and it was all that I could do working alone to keep up.  It seemed like all of the good employees that I found were already working other jobs so they had limited time available to devote to the shop.  After two years of 12-14 hour days and wearing all hats from chief cook to bottle washer, I cried “uncle” and decided to sell.

Early in the mornings as the sun came up over the ocean, I used to sit at the counter having my coffee and talking to God about things. One March morning (the 17th to be exact), I said a prayer asking Him to send me a buyer for “Perky”.  I knew that it would be tough and would probably take a long time because the economy had tanked, people had ceased spending money and the banks had stopped lending.  God answered my prayer two weeks later by sending me a lovely cupcake lady who also had a dream of having a store front for her home-based business.  The timing was right, she had cash in hand and it was a turn key match made in heaven.  “Perky” was in and out of my life in what seemed like the blink of an eye.

Other than being a mom to two great kids, owning this little business has been one of my greatest achievements. Below is a list of things that I wrote about the shop a couple of days after we finalized the sale.  It reveals a little bit more about her personality, what made her so special and about those wonderful people who crossed her threshold practically every day.

5 thoughts on “Perked Up! Coffee Café”